Messing Around in Aladin, part 1 - Tabby's Star and the missing star.

This is another one of those draft entries that I will publish before it is done. I invite comments, questions and criticisms as always.

Looking into some of the stories I've been covering lately that live right in the imprecise border between astronomy and SETI, I've gotten interested in astronomical catalogs. It turns out that there are a lot of them, compiled over the years by a number of different scientific groups for different purposes. With the advent of astronomy outside the visible spectrum, the number of catalogs has multiplied, and it can be a daunting job to sift through them. I invite you to join me in my confusion and delight as I attempt to navigate my way through this glorious mess our civilization has built.

Aladin Sky Atlas is astronomy software made available for free from the University of Strasbourg in France. It gives you a graphical interface to a wide range of astronomical catalogs and image libraries. One thing it lets you do is overlay various catalogs across the electromagnetic spectrum around an object, so you can see for yourself what's nearby an object of interest and what its known properties are.

It turns out astronomers have cataloged far more objects than they have been able to study closely. As a result, there are many things not know about most of the cataloged objects. These are nearly all things that could be known if someone had the time and resources to look into them, but no one has yet.

So, let's start with Tabby's Star, aka KIC 8462852. Until last year, this was like most other stars we had observed - we knew it existed, and about where it was in the sky, and roughly how bright it was, but had not studied it closely. That has changed now. If you just start up Aladin and query for this object, this is what you see:

The image comes from a set of images called "DSS Colored." You don't have to stick with this one, and can layer images and catalogs on top of it. You'll note in the bottom left corner of the image, a scale showing one minute of arc (1/60th of a degree), and the whole thing is about 15 minutes of arc wide.

Next, I'm going to zoom in, because I am interested in a more local view, and I want to identify the stars nearby it, so I'll overlay the SIMBAD catalog, which has many of the brighter objects in it. The objects identified by SIMBAD are marked with little red squares:
Tabby's Star is in the middle, we already know it's Tycho 2 catalog number is 3162-665-1. In Aladin, we can click on the neighboring star just to the East, and find out that it's KIC 8462934, and the star to the Southwest is is TYC 3162-977-1.

One of the most useful catalogs is 2MASS, or the 2 micron sky survey, which is a ground based survey in the near infrared (our eyes can't see much longer wavelengths than 0.7 microns). So, let's overlay the 2MASS point source catalog and zoom in a bit more:

You can see right away that this is a larger catalog than SIMBAD, and has many dimmer objects in it. One of these objects is very close to Tabby's Star in this view, but it could well be much closer or further away. The distance hasn't been reliably measured, and probably the only object in this view that has been closely studied is Tabby's Star itself. There's only just so much telescope time.

Now let's overlay the mid-infrared catalog formed from the space-based WISE telescope observations shown as green squares. You can't see it very well, but there is a green square on top of Tabby's star, since it is in all three catalogs we have overlayed so far: SIMBAD, 2MASS, and ALLWISE.
Now let's have a closer look at the object "closest" to Tabby's Star in the image, which is known as 20061551+4427330. Keep in mind that it may not be close at all. 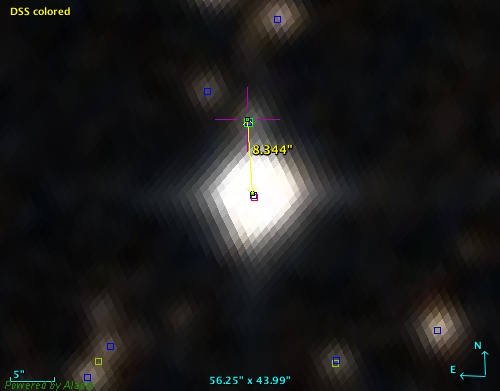 Aladin provides a nice little tool for measuring the angular separation, and you can see here the two objects are about  8 seconds of arc apart. That's a tiny angle, and if it and Tabby's Star are somehow at the same distance, then this object is right in the neighborhood - less than a tenth of a light year away. Unfortunately, its distance is not known and its proper motion has probably never been estimated. If it was moving like a bat outta hell away from Tabby's star, that would be really interesting, and would fuel more speculation - mine in particular.

Some clever young Swedish astronomers recently conducted a search for stars that were present in an older catalog (USNO-B), but not in a more modern survey (the Sloan Digital Sky Survey or SDSS). Their preprint appeared in June 2016, and I interviewed Beatriz Villarroel near the end of July. After a lot of hard work on a sample of 10 millions stars from the USNO-B1.0 catalog and comparing it to SDSS, they only found one candidate that passed all the filters they had established.