It will be next Friday night, and I hope to see lots of people there. I know it's not the best time for people in Europe, but we'll do some a few hours earlier in the day so people in Europe can join in without staying up to the wee hours.

Last Friday, we did a technical rehearsal, which went well. Feel free to watch it on YouTube if you want. It's almost a Pub 1.5.

Update 17 Jun 2019: Some folks on /r/KIC8462852 think this is probably an eclipsing binary, and they make a decent case, but I still have questions.

Am I really onto something here? Well, let's just look at the facts as I can dig them up and see where it leads.

The star first came to my attention as the source of Gaia Alert 16bao which I have been following for some time now. Gaia has photometric data for this star (I'm pretty sure it's a star, as I can discuss later) going back to October of 2014, and the latest available is May of 2019 as of this writing, for a total span of 1674 days.

Here is the light curve from Gaia alert 16bao: 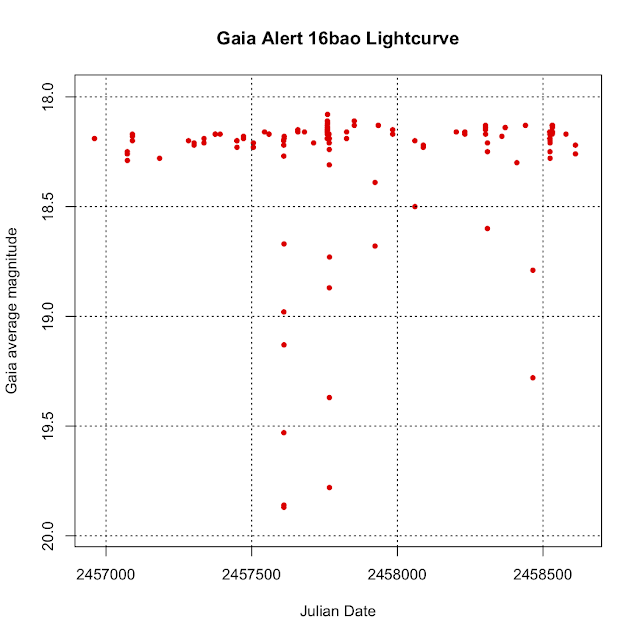 What we see are as many as 6 sharp dips over the course of about 800 days, and the rest of the time the brightness of the star is about steady. The deepest of this dips is about 1.7 magnitudes, which is very deep - about 79% dimming for a short time - over about 20 hours before recovering over about 10 hours. The sharpness and irregular spacing of the dips is reminiscent of Boyajian's Star. The dips are too deep, aperiodic and irregular for an eclipsing binary.

Tabby Boyajian has a new initiative related to the analysis of light coming from the star known as Boyajian's Star that I've blogged about quite a bit here and spoken about over at the Wow! Signal.

The new initiative is about making telescope images in various wavelength bands from the Las Cumbres Observatory network available in a regular basis for community analysis. These images will be centered around Boyajian's Star.

Citizen scientists will crack open the images, analyze the variations in the star's brightness at different colors, and look for emerging trends. It's a great project for a science or math class, or anyone of any age or background interested in participating. All you need is a computer, an internet connection, and the willingness to learn. Help is available with every  step of the process.

The best way to get started is to go on over to the subreddit set up for this purpose, and ask your questions. Download and install AstroImageJ, grab the training images, follow the how-tos and other guidance we have published, and learn by doing. We are putting more information there almost daily, and we expect the first batch of images in about 3 weeks, weather permitting.

You will be participating in solving a scientific mystery. We don't know where the very fine dust is coming from that is causing the deep dips in brightness Boyajian's Star, and there is very likely other material involved that we haven't yet got much of a clue about.  The way these kinds of mysteries are typically solved is through lots of persistent and consistent effort by lots of people. Why not you?

A quick note on Useful and Useless Things

I have started a new video playlist about things I find useful. If you are so inclined, I hope you'll give it a watch from time to time. Here's the first one.

Email ThisBlogThis!Share to TwitterShare to FacebookShare to Pinterest
Labels: video

You've probably heard of the European Gaia mission. This special purpose space telescope is tasked with measuring the precise positions and movements in the sky of about a billion sources.  When its mission is complete, we will have a far larger and more accurate catalog of the distances to the stars in our part of the galaxy, as well as how they are moving with respect to us. To achieve this feat, it has to observe each source many times. In addition to precise locations, Gaia can also measure the brightness of astronomical sources, and this includes distant galaxies as well as stars. Gaia has spotted numerous supernovas in other galaxies, as well as a number of other "optical transients." A transient is either an object that appears out of nowhere like a supernova, or objects the brighten or dim dramatically.

When Gaia spots a transient, a photometric science alert is issued, and there have been lots of these. From time to time I browse through them, looking for unusual ones. It's interesting to track down what is known about the source to see what I can learn.

The most recent one that caught my eye was Gaia18adn. You can tell by the first number that it was issued in 2018. This is described as a "red" object. It is close to the galactic plane and doesn't appear to be extended, which means it's probably a star. If we had a measurement of its proper motion, we could know for sure it's not a galaxy, but we don't have that yet. Its Gaia source ID is 2059140431331158272, if you're keeping score.