Tabetha Boyajian and team have posted a kickstarter to buy telescope time to monitor KIC 8462852 photometrically around the world, 24 x7 using a network of telescopes. When a definite dip in brightness is detected, then hopefully the astronomical world will respond by swinging their more sensitive spectrographs and other detectors onto the star, allowing us some hope of really understanding what is going on around this very weird star.

This would compliment, not replace, the work that the AAVSO volunteers are doing.

I would hope you can see your way clear to donating to both efforts. If enough people show that this matters, it will happen, and maybe, just maybe, a new door will open and we'll see for the first time what is on the other side.
Posted by Paul Carr at 2:15 PM No comments:

Updates to the Century-Long Dimming of Tabby's Star

In the main post on Tabby's Star, I brought up the subject of Bradley Schaefer's contention that Tabby's Star is slowly dimming over the course of a century or so, primarily based upon his analysis of the Harvard library of photographic plates. Not everyone agreed with this, but for different reasons. This post is to absorb updates to this story, at least for a while

Just to be clear, the initial findings of Boyajian, et. al. concerning the star are based upon the Kepler data, some previous surveys, and follow-up observations, and are not affected by this controversy. It may be an additional piece to the puzzle, but ti may also turn out that Schaefer is wrong. Of course, what we don't know is what happened before the plate library started in 1890, and we have limited information since 1989. If Tabby's Star has in fact been dimming, we don't know how long it has been going on.

What Schaefer did was to look at both the digitized library and his own estimates of the star's brightness (in a standard band called Johnson B) directly from the plates, using known comparison stars on each plate. He found it necessary to reject a certain subset of plates he found unreliable. He fit both sets of data to a straight line, as well as data for certain "check stars" nearby with  similar color. He found that the brightness of the check stars had not changed over the 20th Century, but that Tabby's star had.

Astronomical brightness is measured on a logarithmic scale, with dimmer stars having a higher magnitude. An easy way to remember it is that a star 100 times dimmer will have a magnitude difference of 5. That is, if one star is magnitude 7, then a magnitude 12 star is 100 times dimmer. So, one or two tenths of a magnitude is a noticeable dimming. Vega, a bright star in the Summer Triangle, is almost zero magnitude, and probably the dimmest star you can see with the naked eye would be Magnitude 6. Astronomers use particular filters to measure brightness, and in the standard "Johnson B" filter, Tabby's Star is is in the neighborhood of 12.2. That makes it pretty dim, but that is because of its distance, almost 1500 light years away. Vega, on the other hand, is quite close as stars go at just about 25 light years away.  Tabby's star is actually about 4 times brighter than the Sun.

When Schaefer studied the B magnitude for Tabby's Star, we concluded that it was dimming relative to his check stars. There is no way that a star like this - a so-called "main sequence" star should exhibit large variations in brightness over such a time period - no one knows of any other exceptions, and some well-validated models tell us that is what we should expect.

So, is Schaefer right? One of the criticisms of his work is that he used measurements from DASCH that may have issues - the so-called "flagged" measurements. The reasons a measurement might be flagged vary. Schaefer rejected many of these, but not others.

Let's look at the DASCH light curve for Tabby's Star using the unflagged points only. One you notice right away is that the unflagged points are a small minority of all points. Anyway, here it is:
While the curve looks fairly flat, I get that it does show an average decline similar to Schaefer's result. Note that "Menzel gap" starting in the 1950s, during the period when Harvard was not collecting plates because the funding was directed to other projects. The points on the right of the gap are mostly below the average, and the points to the left tend to be above it a bit, but we don't need much dimming to have a real anomaly on our hands. On top of this, B2015 report a recent B magnitude observation (presumably about 2014, but no date is given) of 12.26, which is well below the line.

Schaefer's check stars don't appear to show this trend when using only unflagged points. In hisl atest preprint in April 2016, he changes the check stars to improve their closeness to Tabby's star both in color, magnitude, and proximity, but the conclusion is the same - Tabby's star varies more than the check stars.

The American Association of Variable Star Observers, has been keeping an eye on Tabby's Star since Boyajian, et. al. came out in the fall of 2015.  here is what they have seen so far (early May of 2016): 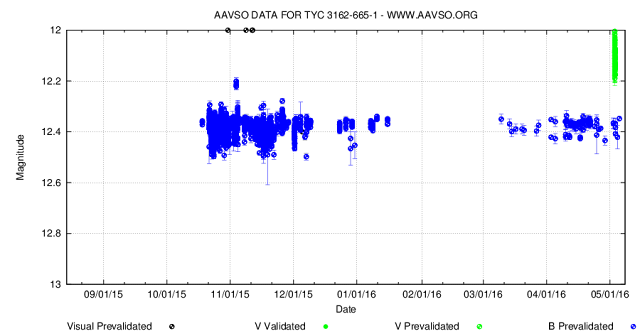 The B magnitudes they are seeing are about 12.4 - consistent with Schaefer, but a bit above his trend line. There are subtleties here that are a bit tricky. For example, the bluish-white Tabby's Star is far enough away that there is measurable reddening of its light by the interstellar medium, and I'm not sure this is accounted for in the same way in all systems.

The AAVSO plots don't show the error bars, and we have a data gap of almost 30 years. Is it possible the star's brightness levelled off in the 1980s and hasn't dimmed all, and maybe even brightened slightly since then? We may never know, but by taking more data, we can monitor longer and longer term behavior.

As noted in the last Wow! Signal episode, it's now time for the photometry experts to compare notes and hammer out a consensus on this issue. Is there compelling evidence that Tabby's Star is dimming? I think so, but I could wrong - there's a first time for everything.