In the first part, we talked about some of the variables that I think could control the observables of a Bracewell Probe.  This is essentially a first, crude move toward mapping our ignorance of these hypothetical machines.  We can't know what Bracewell probes are yet, or even if they exist at all, but perhaps we can constrain or at least make some reasonable assumptions about what they could be.

Let's start with what some of the top level requirements would be for a Bracewell Probe.

Note that a self-reproducing, or Von Neumann probe is not required. As Geoffrey Landis has pointed out, this is necessarily a much more complex machine than a simple probe. The goal of a Bracewell Probe is contact, not colonization.
Now, let's consider a Concept of Operations - or ConOps as we call it in the trade - for a Bracewell probe. As usual, there is more than one way to do it, but let's go over a broad plan that seems to work and is consistent with what we think we know about physics.  This is part of what I call a "reference architecture."  If you think any part of it doesn't work, let me know in the comments.

First, after a very long journey that could have taken hundreds or even thousands of years, what is probably a relatively massive propulsion stage arrives in our solar system after a long period of deceleration. The first perihelion could be fairly close to the sun, because that is more efficient and because telescope data would have indicated the presence of inner, rocky planets. The first orbit is probably highly elliptical, taking the probe far from the sun after a first pass of a few weeks or months to observe the terrestrial planets. Shortly after arrival, the interstellar propulsion system separates, perhaps to move on to another star system with another probe, or to simply be discarded and retired while still moving in a trajectory that takes it out of the solar system.
every few centuries or so, or possibly even less often. This means that it has to generate its own energy. Note we have assumed only one probe here. It might make sense to drop off more than one, since random collisions with solar system objects are more or less inevitable over long stretches of time, and the odds of just one surviving go from good to poor if we plan to camp out in the solar system for a very long time.

Once in this long period orbit, the probe(s) will need a propulsion capability to be able to set up its orbit for close encounters with the terrestrial planets.  Unless the probe is very large, it will likely need to get close to candidate planets to monitor activity of the the life there.  Occasional flybys lasting a few hours should be sufficient to gather all the data required when a planet is in a phase of purely biological evolution, with no culture.

Once culture emerged on Earth, more frequent flybys might make sense.  The slow march of civilization might be best observed by noting changes on the surface - changes taking place over years or decades rather than millenia. For very long lived probes, this would argue for lowering the aphelion to allow for more frequent flybys - perhaps somewhere just beyond the orbit of Saturn. Eventually, the probe might "park" itself somewhere by landing on a moon or asteroid, thus reducing or eliminating the need for its aging subsystems to maintain attitude stability.

At some point in its mission, the probe has responsibility for autonomously deciding whether or not to establish contact with any technologically savvy beings in the solar system. Bracewell speculated that this would be done by echoing terrestrial radio or television transmissions with a delay that could only come from Deep Space. Whether this would work is not clear, since we generally don't listen for our own transmissions.

From this ConOps, there are some places we would NOT expect to find a Bracewell Probe intact.  The surface of Mars, for example. It went dry billions of years ago, and there never would have been any incentive to land on Mars, given our mission of searching for intelligent beings. Mars may once have harbored life, but it would be very surprising if it were ever more complex than plankton.  Certainly we have seen no trace of such a probe yet from the various landers and rovers that imaged the surface of Mars at close range.

For similar reasons, we would say the same about Venus, which also may have once been habitable.

Now we'll look at the influence diagram for these variables and how they would influence the observables.  Next, we'll try to narrow down the range of these variables a bit. Finally, we'll consider a range of observables we might be able to detect in our own solar system, and form a small ensemble of candidate hypotheses. 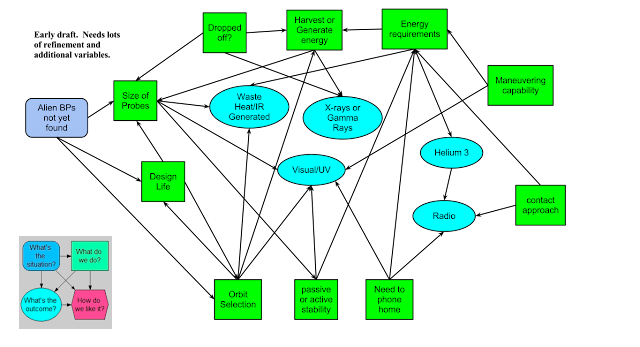 The major observables here (shown as ovals in the diagram) are in the electromagnetic spectrum. We could conceivably find a probe in situ, parked on an asteroid or moon, but even then the major means of detection would likely be optical or infrared, long before we touch and sample it. The electromagnetic spectrum for our purposes divides up into the low energy radio frequency end, infrared, optical, and the high energy X-ray and gamma ray end of the spectrum. Strong radio emissions are likely to be episodic, if at all. If the Bracewell Probe decides to contact us via the radio spectrum, finding it will be easy. If it has to phone home from time to time, we would not likely intercept very much of that energy here on Earth for geometric reasons (I am assuming they would have highly efficient antennas with negligible backlobes).

There could be weak radio emissions at a specific frequency due to hyperfine transitions of Helium 3, and it would leave a trail as the probe moved through the solar system. helium 3 is a possible byproduct of a fusion reactor, and although it is stable, could be produced by the decay of tritium.  This is at the end of a long list of assumptions, but could make for a clear signature for something artificial.

Almost any probe with an active energy source will have an infrared (IR) signature.  If it is a compact, high energy source, it might be quite bright in IR.  As the influence diagram shows, this will depend upon energy requirements for propulsion and communications.  Specifically, the probe might be much hotter than a natural object at that distance from the sun.

The visual signature is more complicated because it depends on so many variables, but distance from the sun and physical size are key.  These days, we routinely spot objects a few meters in size when they come near the earth, and even amateur astronomers can sometimes see them.  However, distinguishing a Bracewell Probe from a small asteroid or discarded rocket body isn't easy.  If the probe is very large, the problem of seeing it gets easier (at the same distance from the sun), but we still would not know how to distinguish it from the many thousands of natural objects of comparable size orbiting the sun.

The high energy signature may be of considerable interest, since an X-ray or gamma ray source in orbit about the sun could clearly be a candidate for an artificial object.  If the probe uses fusion or antimatter energy then it would likely produce some high energy photons.  A very advanced reactor would probably absorb nearly all of these, however, so we are back to IR.

If we did find a Bracewell Probe - even a very old and badly damaged derelict probe from an extinct civilization - it would be the most important discovery for a generation on either side.  We can only begin to imagine what we would learn from it.  In the next post of this series, we'll talk about the best practical ways we could detect Bracewell probes now, piggybacking on astronomy, planetary science, and planetary protection assets.

Please, let's have your comments.

The Dream of an Open Channel by PaulCarr is licensed under a Creative Commons Attribution- ShareAlike 3.0 Unported License.
Posted by Paul Carr at 1:40 AM