The Gaia data release and Tabby's Star - the ELI5

Updated 6 September 2016: the bookshelf analogy was a bit muddled - I think I've fixed it.

On the 14th of September 2016 we are expecting the first data release from Gaia, and it could well
turn out to reinforce, constrain, or rule out some favorite conjectures about the weird behavior of a star romantically named KIC 8462852, aka Tabby's Star - behavior that was discovered by exploring the data from the Kepler Space Telescope.

Now, this is going to get pretty elementary, so if you feel you're already up to speed on the topics in the last paragraph, you may want to skip this.

Why this star is weird is covered in this earlier entry. The TL;DR on that is that it was showing bizarre variations in brightness completely inconsistent with the kind of star it is. We think that we know how the brightness varies, but can't be exactly sure how bright the star is in absolute sense - how many

The NASA Kepler probe that performed these observations is tightly optimized to do just that - measure variations in brightness of stars. However, this means that it's not particularly well suited to making super precise measurements of star positions. Fortunately, the European Space Agency has a sophisticated satellite in space right now that is exactly that - it can measure the distance to over a billion stars using something called the parallax method that I will discuss in a moment. It can also measure the color of stars and how fast they are moving away from or towards us.

The nice thing about parallax is that it is really simple, and you don't need to make any assumptions about a star to measure its parallax. Essentially, we watch a star for a year or longer, and make note of the very tiny variations in its apparent position as the Earth moves around the sun. Simple yes, but since the diameter of the Earth's orbit around the sun is only roughly 0.00004 light years, and the nearest star is just over 4 light years away, it takes a very clean, precise measurement to get this right.

If you want an obvious example of how this works, stand near a bookshelf loaded with books and hold your index finger straight upright in close to your face. Now, close your right eye - the finger will block your view of a particular book on the shelf.  Next, open your right eye and close your left eye. The finger now blocks a different book on the shelf.  Finally, move your finger about twice as far from the shelf and try this again. You will see that the two different books blocked by your finger are now closer together. This is how parallax varies with distance - your two eyes are the same distance apart,  but the distance to your finger is the interesting variable. An aside note is the amazing job your brain does integrating information from two eyes at the same time - play around with it.

Let's take a simple look at the math. It turns out that the amount the position in the sky varies over a year - the parallax -  is inversely proportional to the distance -  if star A is twice as far away as star B, the parallax of A is half that of B, since the EArth's orbit is reasonably circular. So, using Wolfram Alpha, we'll figure out about what it is for a star 4 light years away, given that a light year is about 9.5 trillions kilometers. 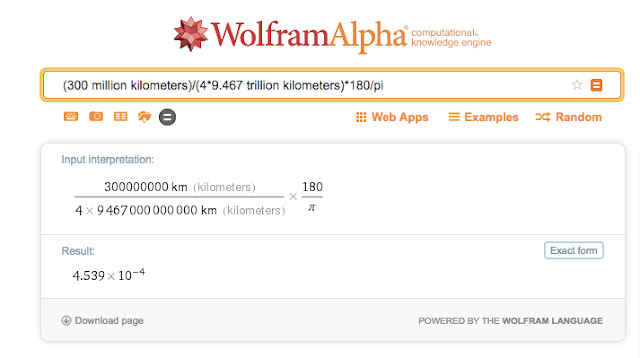 That number is an angle in units of degrees (the 180/pi factor at the end converts it from radians). That is a little sliver of a degree, or slightly more than one arc second, or 1/3600th of a degree. Maybe you can imagine just how hard it is to tell if a star is moving against the background of more distant stars and galaxies by that very slight angle.

When I was a college student, all the parallax measurements were done with ground based telescopes, and only a handful of stars had accurately measured distance. The problem is that the Earth's atmosphere smears out the light from a star enough that if it is not one of the closest stars, it's parallax becomes impossible to determine.

Then, in the late 1980s, came the Hipparcos mission. Because Hipparcos used a space based telescope, it was able to measure the distances to many more stars using the parallax method - more than 100,000. This was a remarkable achievement and allowed us to recalibrate the distance scales of the entire universe.

Now, more than 20 years later, we have European Space Agency's Gaia probe. Bringing much more advanced technology to the job of measuring distances, Gaia promises to provide accurate distance measurements for more than 1 billion stars. Even Tabby's star, which is probably hundreds of times further away than the nearest stars, should have its parallax accurately determined for the first time. It was, unfortunately, just a bit too dim and distant for Hipparcos.

Parallax measurements only depend on the distance to the star. It doesn't matter what type of star it is, or anything else. So, when we get the parallax measurement to Tabby's Star, we'll be able to compare
that to the distance measurement made by measuring its brightness, based upon how bright we think it should be based upon what kind of star it appears to be from its color and so forth. For Tabby's Star, Gaia should be able to measure  the parallax down to about 25 millionths of an arcsecond, which is really good, and should give us an accurate parallax.

Why is this interesting? It is because a couple of different scientific investigations have reported results that show the star unexpectedly dimming on different time scales - a century, and a few hundred days. Montet and Simon's paper provides a fine description of this if you want the details. I interviewed Ben Montet on the Wow! Signal, and got him to explain even further.  Think about it - if this is true, it begs the questions of how bright the star was to begin with before it started dimming. Is it possibly considerably closer (weird, but supportive of the dimming hypothesis), or farther away (even weirder), than the current estimate says?

we'll know on September 14th. Whatever the result, it will be of great interest. However, don't get your alien magastructures out just yet - we also don't understand how ET technology could have caused the date we observe. We simply haven't been creative enough, and that would also apply to natural explanations as well.