You've probably heard of the European Gaia mission. This special purpose space telescope is tasked with measuring the precise positions and movements in the sky of about a billion sources.  When its mission is complete, we will have a far larger and more accurate catalog of the distances to the stars in our part of the galaxy, as well as how they are moving with respect to us. To achieve this feat, it has to observe each source many times. In addition to precise locations, Gaia can also measure the brightness of astronomical sources, and this includes distant galaxies as well as stars. Gaia has spotted numerous supernovas in other galaxies, as well as a number of other "optical transients." A transient is either an object that appears out of nowhere like a supernova, or objects the brighten or dim dramatically.

When Gaia spots a transient, a photometric science alert is issued, and there have been lots of these. From time to time I browse through them, looking for unusual ones. It's interesting to track down what is known about the source to see what I can learn.

The most recent one that caught my eye was Gaia18adn. You can tell by the first number that it was issued in 2018. This is described as a "red" object. It is close to the galactic plane and doesn't appear to be extended, which means it's probably a star. If we had a measurement of its proper motion, we could know for sure it's not a galaxy, but we don't have that yet. Its Gaia source ID is 2059140431331158272, if you're keeping score.


Here is its lightcurve as measured by Gaia and plotted by me:
You can see that it dips a fair bit over a couple of years, then declines sharply in brightness for several hundred days. It's declined by about 1.5 magnitudes, which is short of winking out altogether, but is about a three quarters loss of luminosity. If it continues to diminish, that would be really intriguing.

So, let's get out Aladin again. It's had a major upgrade lately (Version 10.0 in use here) and I find it an improvement, although the number catalogs and images available in the hierarchical menu is daunting.

The right ascension/declination coordinates for the Gaia source are given as 302.43742, 35.96636. I overlay the color image made overlaying observations by the Wide Field Infrared Survey (WISE) space telescope, and the ALLWISE catalog there:
If you click on the red circle nearest the reticle, you get which ALLWISE catalog item it is: J200944.98+355759.1. It's really bright in the W4 band, which is the longest wavelength WISE band, and the contamination and confusion flags look good in this case.

So, a star declining rapidly in brightness that is bright in the IR - a Dyson swarm in the making? Please? Well, you know - extraordinary claims, yada, yada. We need a closer look.

The same star has also been tracked by ASAS-SN, which is a ground-based telescopic campaign focused on transients. Here is a plot of the ASAS-SN V band data for this star, which may have some of the same dips.


So, it looks like an inconsistent story. Where is that deep decline near the end of the curve in the ASAS-SN data?

The answer appears to be that there is a lot going on between the Gaia observations. If I subtract a constant 5.2 from the Gaia data (blue circles), and overlay the last 300 or so days of the two plots, I get this: 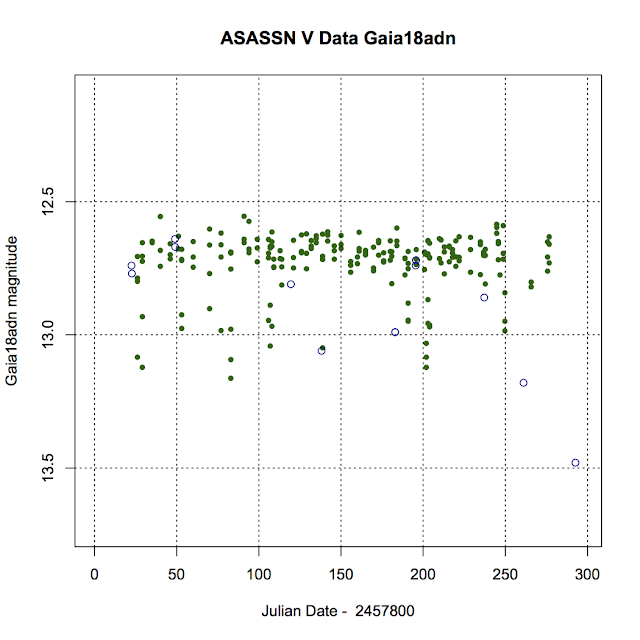 What looked like a smoothish declining trend in the Gaia data is now revealed as some highly variable photometric activity.
That suggests that it is a Young Stellar Object, or YSO, and is actually more like I would expect a YSO to behave, since we don't expect smoothly varying dust concentrations blocking the star's light. As has been seen with other YSOs, there is a lot of fluctuation. This tends to predict that we should see the star mostly up around 12.7 V magnitude when the star becomes visible to ASAS-SN again in the Spring of 2018. So, probably not winking out.

YSOs typically have a lot of dust surrounding the star, soaking up the starlight and reradiating it in infrared, which would explain the strong signal in W4.  Now, that dust will eventually get organized and the star will become more clearly visible.

It's also nice to zoom out on the WISE image: 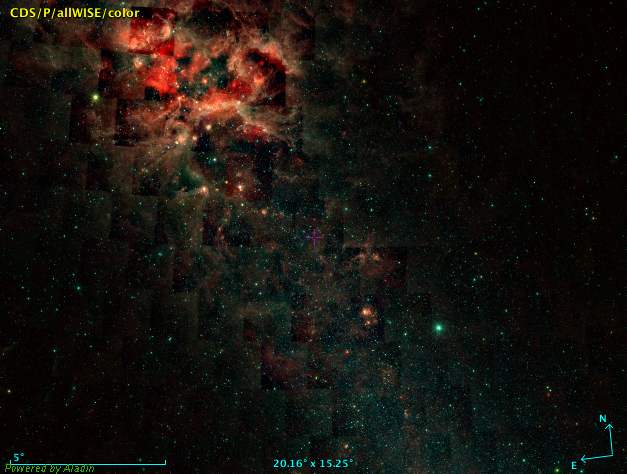 I'm just showing you that because I think it's pretty.

You can just start loading catalogs in Aladin to your heart's content to see if anything else is there. For example, there doesn't seem to be an X-ray source there. Here's an image from one X-ray survey:

There is radio energy in that region, but this is typical of the galactic plane. For example, here is the nearby Planck HFI color composite image: 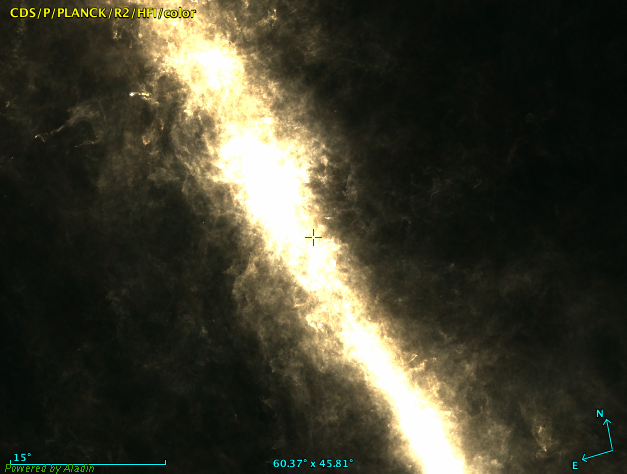 In my relatively brief search, I could find anything weird about this star.  The only missing piece is that I would like to know more about how far away it is, and how fast it is moving across the sky. Still, from what I can tell it is very likely a YSO.
Posted by Paul Carr at 3:05 PM